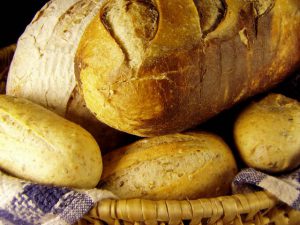 Gluten-free is the new fat free.  It seems like every time I turn around, I’m meeting another person with Celiac Disease, seeing another gluten-free bakery pop up or walking through grocery store aisles lined with gluten-free goodies.  In fact, doctors estimate that 7 out of 10 people have a gluten sensitivity.

Gluten sensitivity is so common; it’s estimated that 99% of the people suffering from gluten sensitivity are unaware of it, and even those who don’t have full blown celiac disease have an increased risk of death by 35% if they consume gluten containing products.

So, what exactly is gluten?  How do you know if you’re sensitive to it?  And are all those gluten-free substitutes healthy?

Let’s start with the basics…

Gluten is a protein found in wheat and some other grains, like barely, rye, and spelt.  Gluten is formed when two protein molecules called gliadin and glutelin combine, usually once water or liquid is added to the flour.  Gluten gives dough its stretchy, gluey texture and is in part responsible for the rising of the dough.  Gluten also helps give the finished baked good its shape.

What is Celiac Disease?

Celiac Disease is a condition where the body has an immune response to the gluten protein found in wheat, barley and rye.  When gluten is consumed, the villi, tiny little finger-like projections along the interior of the intestine, atrophy and can no longer extract nutrition from food.  The most extreme stage of Celiac Disease is called total villus atrophy (TVA).

Gluten has been implicated in neurological disorders such as headaches and ADHD.  Children diagnosed with ADHD report improvement in symptoms after following a gluten-free diet for six months or longer.

How Do You Know if You’re Gluten Intolerant or Have Celiac Disease?

Standard tests for gluten sensitivity and Celiac Disease test for antibodies to the amino acid gliadin; however, this test is often wrong because many people with gluten sensitivity don’t react to this specific amino acid.  So, if you’re reacting to a slightly different component of gluten, your Celiac Disease test will come back negative, but gluten can still be damaging your body.

Other tests that look for something called tissue transglutaminase require you to be in the most extreme stage of shutdown, total villus atrophy, to be accurate.  If you have reached the height of Celiac Disease, these tests are right on the money, but if you’re only experiencing inflammation or partial villus atrophy, the tests are wrong seven out of ten times.

What Does Gluten Do to Your Body?

A review paper in The New England Journal of Medicine listed 55 conditions that can be caused by eating gluten, including osteoporosis, irritable bowel disease, inflammatory bowel disease, anemia, cancer, fatigue, canker sores, rheumatoid arthritis, lupus, multiple sclerosis, and almost all other autoimmune diseases.  Gluten is also linked to many mental and emotional disorders, like anxiety, depression, schizophrenia, dementia and migraines.

If You Have a Gluten Sensitivity or Celiac Disease, Do You Have to Give Up Wheat and Gluten Completely?

If you have been diagnosed with Celiac Disease, you must completely eliminate wheat and gluten from your diet.  Even one milligram of gluten – about the size of an eighth of your thumbnail – is enough to keep your intestines from healing.

If you are merely sensitive to gluten, it’s yet unknown whether eating gluten from time to time will have adverse effects or not.  Doctors are still doing research with their improved tests to monitor the progress of gluten-sensitive individuals.  It’s very risky to eat gluten even when your symptoms are not present, however, because gluten-intolerant individuals face a much shortened life span than those without gluten sensitivity.

When you eat gluten, your body treats it like a foreign invader, attacking it instead of treating it like food.  This creates systemic inflammation and is often associated with abdominal bloating.  Over time, this constant internal war wears down your body.  Even though you may not overtly feel symptoms from eating gluten, effects can still be happening at the sub-clinical (cellular) level.

Finally, Are Gluten-Free Products Good for Me?

Just because it’s gluten-free doesn’t mean it’s good for you.  A brownie is still a brownie in all its sugary gloriousness, even if it is gluten-free.  In fact, many gluten-free foods contain more fat, sugar and carbohydrates than their gluten-filled counterparts.  Most store-bought gluten-free mixes are full of fillers, like sugar and starch.  It’s no more okay to sit down and eat a box of gluten-free cookies than it is to eat regular cookies.  That said, gluten-free products can provide nice treats for people on gluten-free diets, but eat them as you would any candy…sparingly.